Events and Activities to do in Chicago at Navy Pier

Looking for fun things to do in Chicago? There’s always something going on at Navy Pier! From cultural programming and seasonal celebrations to special events, festivals, fireworks and more, discover fun and free Chicago events at Navy Pier all year long. 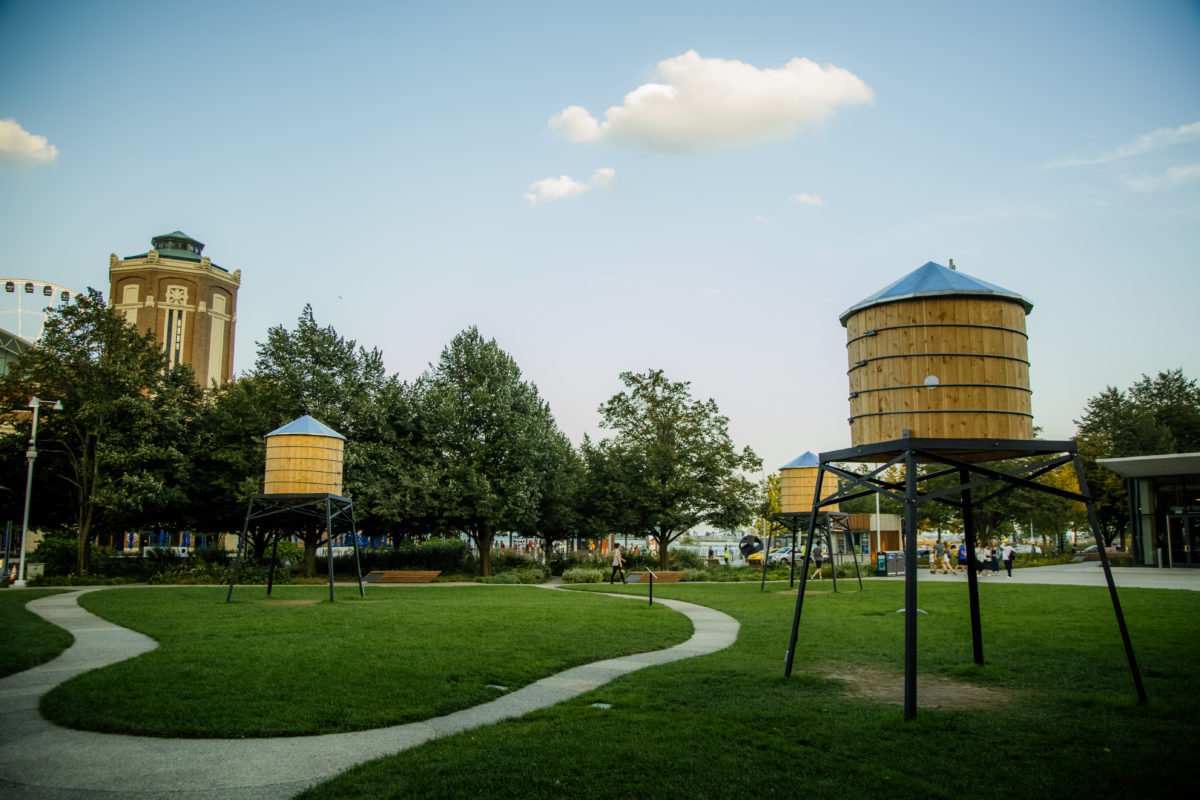 Iván Navarro: This Land is Your Land

An image that has been a part of the upper realms of Chicago’s landscape comes “down to earth” to Polk Bros Park. Three hauntingly beautiful water towers are transformed as sculptural objects with neon interiors. Viewers are invited to stand beneath them and gaze above to experience.

About This Land is Your Land

Originally debuted at New York’s Madison Square Park in 2014, the three sculptures – BED, Ladder and ME/WE – are composed of neon-lit interiors with infinite reflections of each structure’s respective design. One tower consists of a limitless repetition of the word, “BED;” another features the boundless image of a ladder; and the third displays the words, “ME” and “WE” in redundancy. An internal arrangement of mirrors enables each word or image to repeat perpetually through a seemingly endless vertical space. Measuring at approximately seven feet in diameter and erected on roughly eight-foot-tall supports, each tower allows guests the ability to stand underneath the sculpture and gaze above for a truly unique viewing experience. 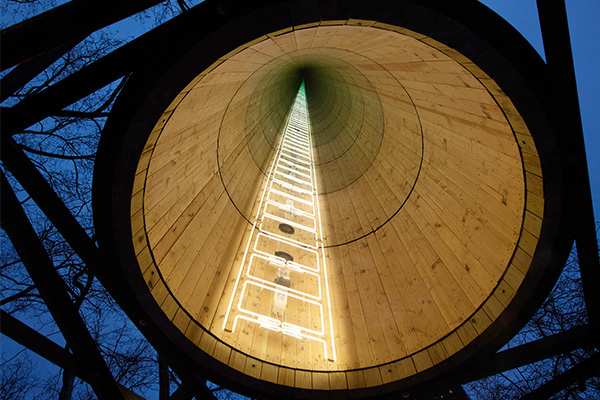 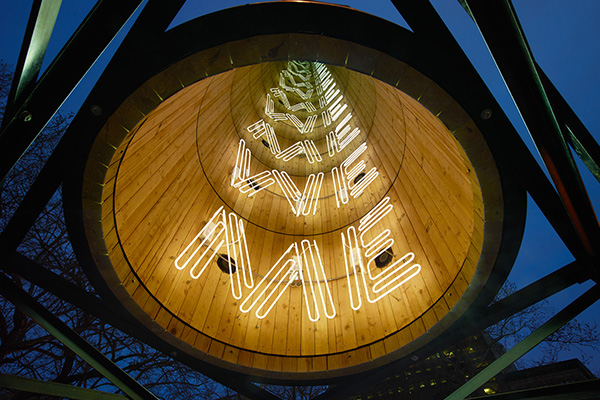 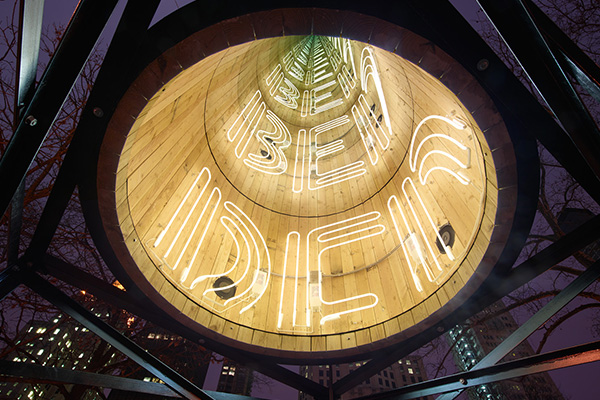 Iván Navarro was born in 1972 in Santiago, Chile, where he grew up under the dictatorship of General Augusto Pinochet. He is known internationally for his socio-politically charged sculptures of neon, fluorescent and incandescent light. Navarro’s unique and captivating use of light transforms the exhibition space by means of visual interplay. Navarro represented Chile at the 53rd Venice Biennale.

Since 1994 Chakaia Booker has made abstract sculptures from discarded rubber tires salvaged from city streets, auto body shops, and dump sites. Cutting, shredding, bending, and transforming them into wild organic shapes, she creates objects that evoke the human body and spirit, without being literal representations.  Today, she works almost exclusively with recycled tires—slicing, twisting, stripping, weaving, and riveting rubber and radials to create and exaggerate the textures, prickled edges, and torqued forms of her radical refashioning. Whether she is creating small-scale wall reliefs resembling ballistic blowouts, suggestively hairy and ovoid pedestal sculptures, or colossal landscape-like tableaux, Booker transforms tires—iconic symbols of urban waste and blight—into extraordinary compositions of renewal.

Booker received a B.A. in sociology from Rutgers University in 1976, and an M.F.A. from the City College of New York in 1993. She gained international acclaim at the 2000 Whitney Biennial with It’s So Hard to Be Green (2000), her 12.5 x 21 foot wall-hung tire sculpture. Booker received the Pollock-Krasner Grant in 2002 and a Guggenheim Fellowship in 2005. She has exhibited in group and solo exhibitions nationally and internationally.

Six sculptures by Booker have been on view in Millennium Park since 2016; four of those works will come to Navy Pier this April (two sited on Illinois Street just outside the entrance of Navy Pier; one on the south dock at the entrance; and one in Pier Park). 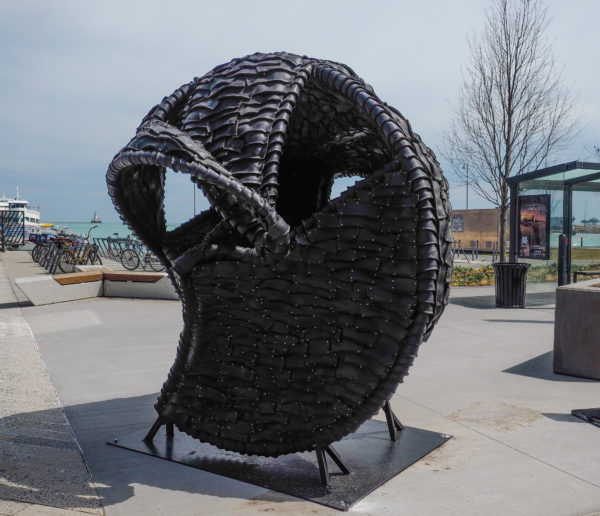 Booker’s inspiration for this sculpture was Madam C. J. Walker–best known for developing a successful line of hair-care and beauty products for black women–and considered by many to be the first African American businesswoman and philanthropist. For the artist, this sculpture evokes the pursuit of success and giving back to society. 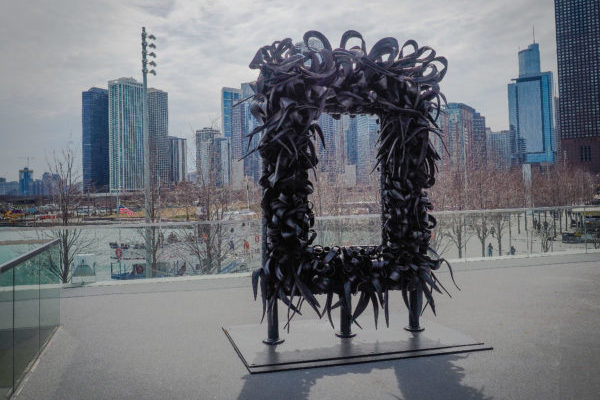 Take Out is a whimsical piece embellished with large, looping, swirling tendrils of tire. Evoking photographs and reflections through its frame- or mirror-like rectangular shape, Take Out invites viewers to explore and engage in the Chicago cityscape and alternately, views of the Centennial Wheel in Pier Park. 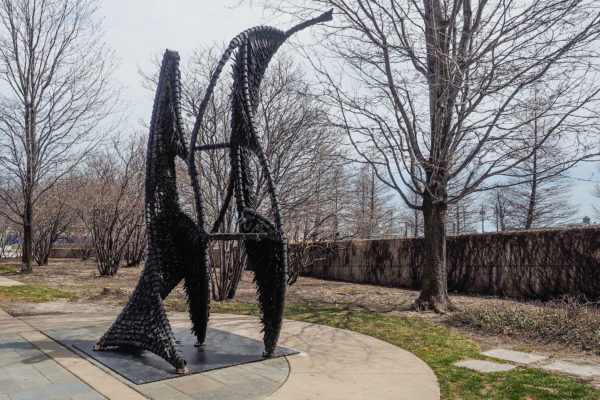 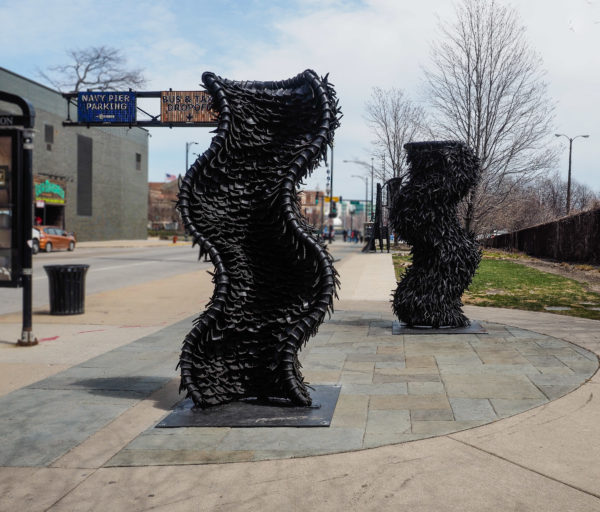 Gridlock represents a symbol of human journey and life—shows an interplay of concave and convex spaces. The title references travel patterns in cities.

“My work challenges the notion that tires are uniformly black. I want to encourage people to examine assumptions about color, patterns, textures, and functions…. Also, our assumptions about most subject matter, including people, their diversity, and the diversity of ideas and perceptions.” – Chakaia Booker 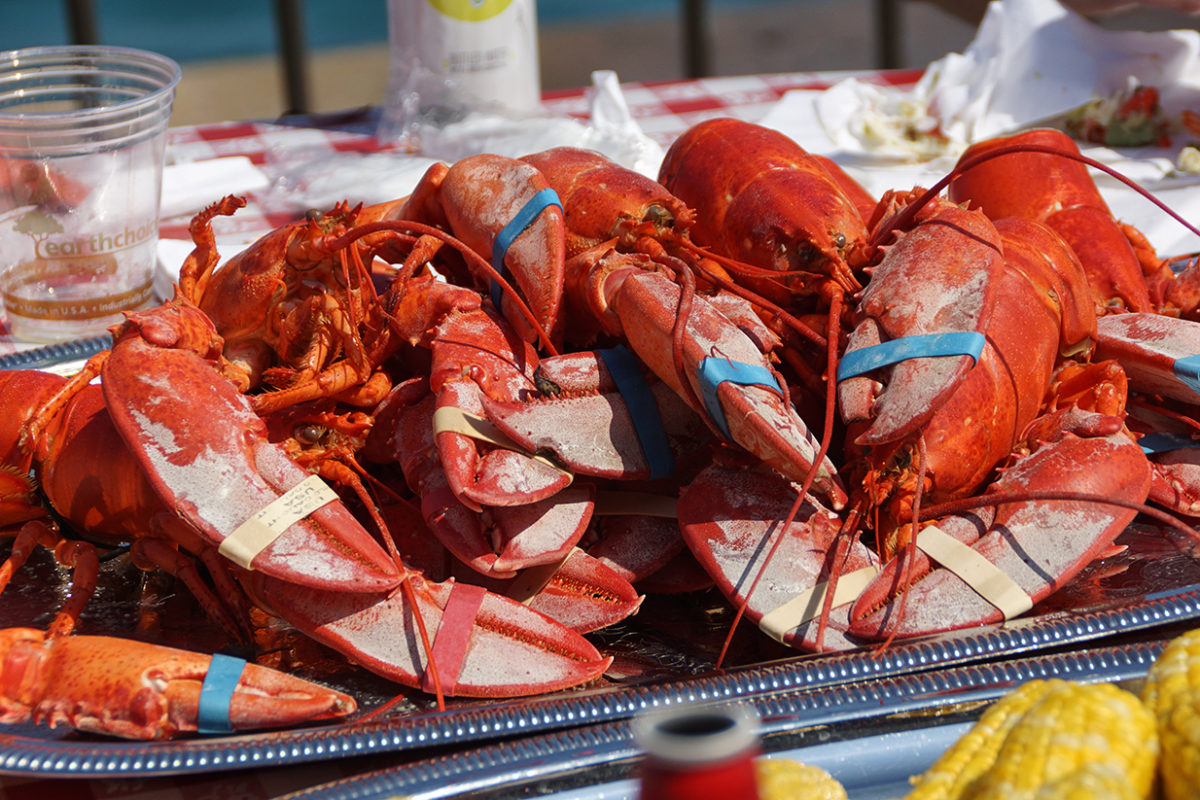 Join us Labor Day weekend for the largest seafood and lobster festival in the Midwest!

Join us for summer’s last hurrah, where you can enjoy live lobster flown in fresh from the cold waters of the East Coast, live music performances, family-friendly games and activities, unique craft shopping, land food options, and cold beverages. What’s not to love?

The Great American Lobster Fest® will take place on the Pier’s east end, in and around the Aon Grand Ballroom. Should it rain, there is plenty of covered space inside for advance purchase Lobster Meal ticket holders and VIP ticket holders. 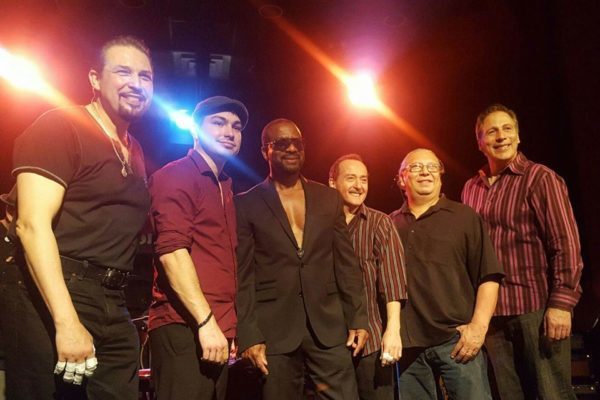 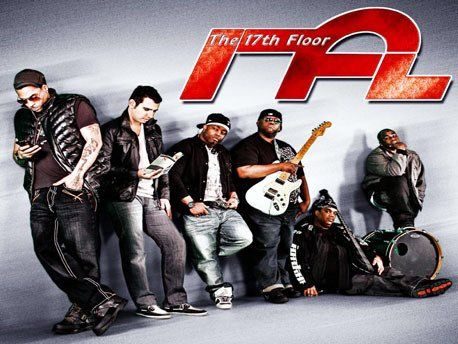 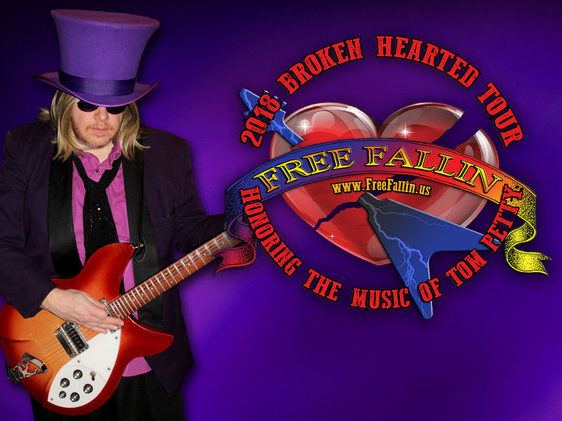 South of Disorder (A tribute to Jimmy Buffett) – 3:00pm 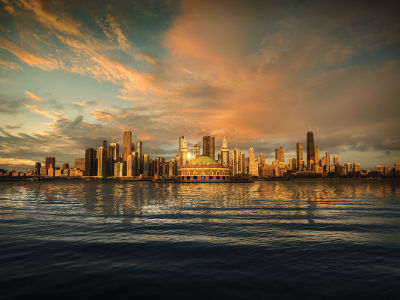 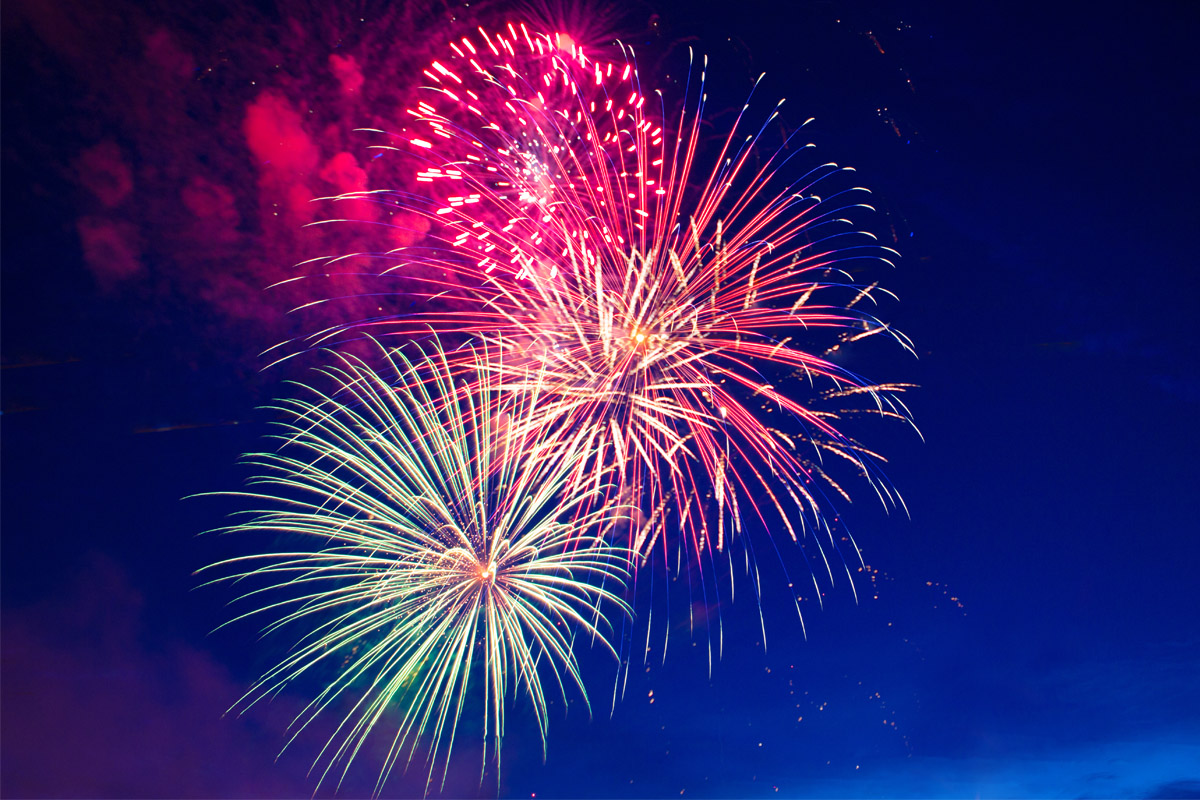 Come to Navy Pier for a special Labor Day weekend fireworks show over Lake Michigan, presented by Miller Lite! Join us in the Miller Lite Beer Garden for great food, cold brews, and the very best views of this spectacular summer tradition.

This all-ages event is free and open to the public.

Join us in the Miller Lite Beer Garden for a free, all-ages show with Indika Reggae Band and special guests, DJ Papa G and Radio Free Honduras, part of Navy Pier’s free music and dance series, Live on the Lake! 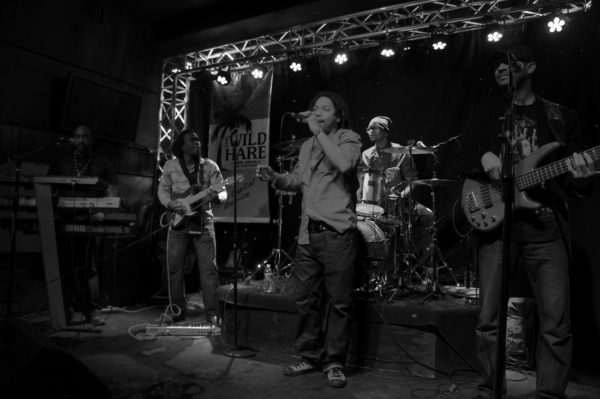 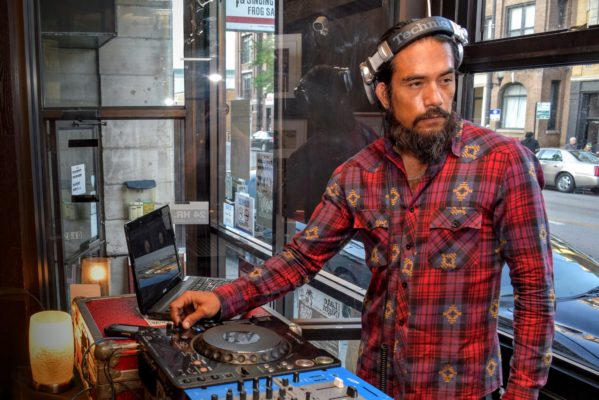 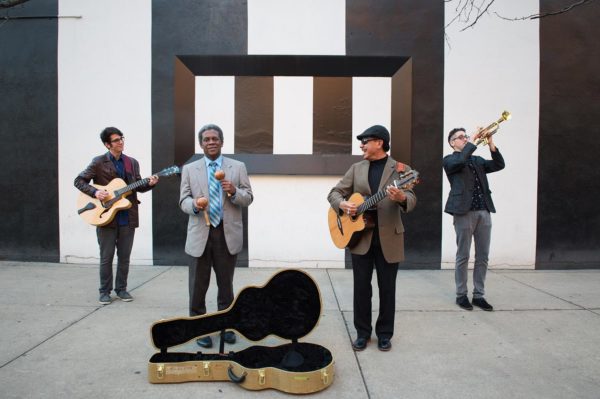 Born in Port Antonio, Jamaica Courtney started his musical career playing keyboard in a gospel band at age 12. He picked up the bass at age 16 and by age 19 went to play on cruise ships for the next 7 years. After moving to Chicago, he joined Indika band in 1997.

Under his leadership Indika has performed extensively throughout the midwest and has backed an array of top reggae acts including Gregory Isaacs, Everton Blender, Frankie Paul, Ritchie Spice, Richie Stevens, Christopher Martin, Luciano, and Gramps Morgan just to name a few.

Charlie Baran has lived a life of music.  Before moving the the United States he was a founding member of the legendary Honduran musical group Banda Blanca, who’s song “Sopa de Caracol” became the #1 Billboard Top Latin Songs hit in 1992.  Now a maintenance man at a Catholic grade school by day, Charlie has kept his musical flame glowing largely through acoustic solo performances around Chicago for the past ten years.

Charlie Baran is a true virtuoso.  No one sees him perform without recognizing the presence of a true master – an heir to a rich tradition of Honduran music, as well as a guitar slinging showman and a gifted songwriter whose skill transcends all genres.  But throughout most of his career he has existed in the shadows – until the formation of Radio Free Honduras.

Radio Free Honduras is a diverse collective of Chicago musicians, all united under one goal – supporting the artistry of Charlie Baran and bringing this tremendous talent into the spotlight where it belongs.  Founded by Dan Abu-Absi, longtime guitarist for JT and the Clouds and Birds of Chicago, Radio Free Honduras plays mostly Baran originals, but their live shows often feature a wide variety of reimagined cover songs. This band provides Charlie with the wide musical pallet his talent (and songs) deserve.  Abu-Absi has gathered a large, revolving collective of some of Chicago’s most talented musicians; lively percussion, eclectic instrumentation, and rich harmonies all provide the backdrop, allowing Charlie to do what he does best – stunning guitar work, tapping into what seems a limitless supply of energy and enthusiasm for music.

Charlie Baran has lived a long and storied musical life – but very few are familiar with his side of the story.  Radio Free Honduras has made it their mission to change that.