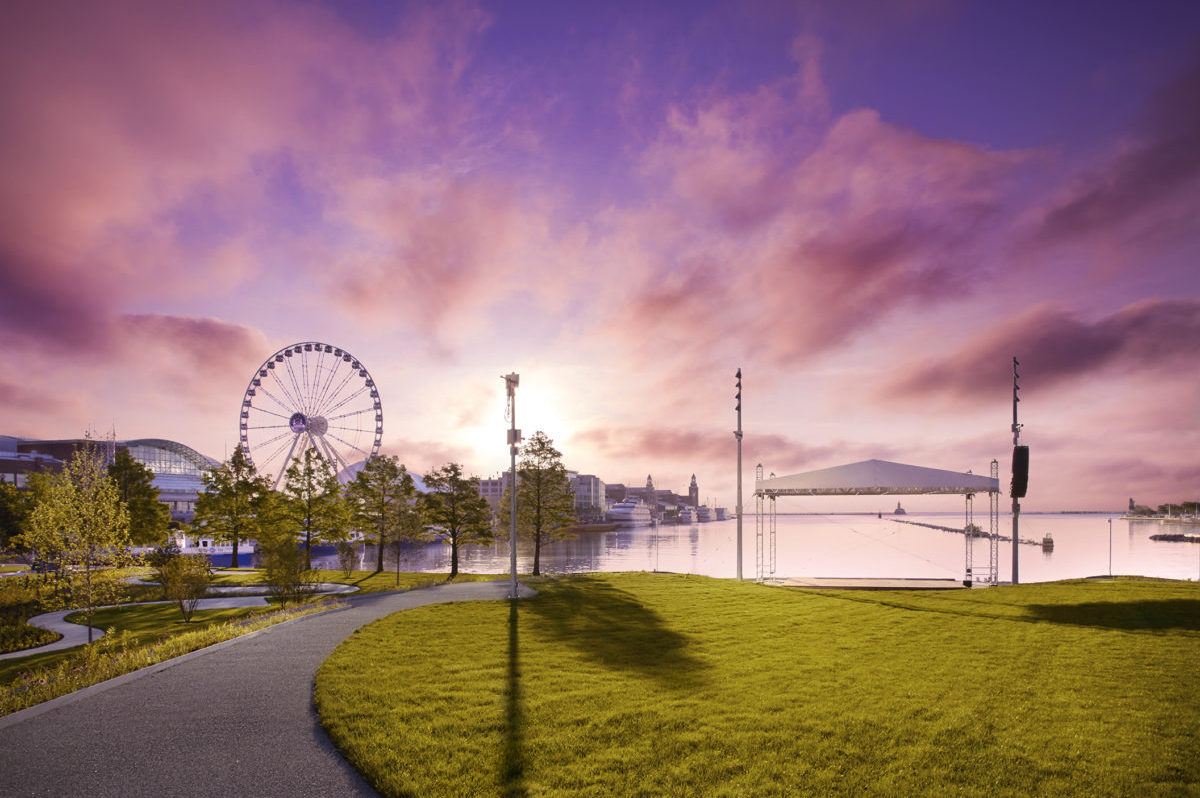 CHICAGO – Navy Pier, Chicago’s mission-driven cultural district, has fulfilled another key element of its Centennial Vision with the completion of Polk Bros Park, its 13-acre green space that serves as the Pier’s gateway and the city’s front yard. Starting Monday, July 10, Navy Pier will officially open the new Polk Bros Performance Lawns, located at the south end of the Park,
offering free arts and cultural programming throughout the summer and beyond. The completion of Polk Bros Park and introduction of new programming within the renovated space further exemplifies Navy Pier’s ongoing commitment to offer guests free, one-of‐a-kind experiences created to inspire, educate and connect communities across the city and globe.

Designed by award-winning landscape architects at James Corner Field Operations (JCFO), the Polk Bros Performance Lawns are set between the stunning backdrops of Chicago’s iconic skyline and majestic lakefront. The Lawns feature two new stages– City Stage and Lake Stage – equipped with state-of-the-art sound and lighting to support a wide range of creative expression
in music, dance, theater, cinema, public art, festivals and more. The Lake Stage features a sloping area facing Lake Michigan that accommodates up to 1,700 guests, while the City Stage features “city steps” and accommodates up to 700 guests for more intimate experiences and spectacular views of the skyline.

“The completion of Polk Bros Park and opening of the Polk Bros Performance Lawns mark a significant moment in Navy Pier’s history as we take the next step in our transformative journey to become a world-class public space and leading arts and cultural destination,” said Navy Pier President and CEO Marilynn Gardner. “Through this newly renovated space, innovatively
designed by James Corner Field Operations, we are excited to offer our guests unparalleled new experiences and the chance to create memories for years to come. We are grateful to the Polk family and the Polk Bros. Foundation for helping us bring this vision to life through their generous gift and partnership that continues to help shape our physical and programmatic evolution.”

In 2014, the Polk family, legendary Chicago retailers and longstanding benefactors to the city and its neighborhoods, announced a $20 million legacy gift to Navy Pier to transform its green entrance and activate it with free arts and cultural offerings. The Pier’s community programming is supported by the Polk Bros. Foundation, which seeks to make Chicago a place
where all Chicagoans can reach their full potential.

“The Polk Bros. Foundation is proud to work with Chicago’s treasured landmark to create a space where Chicagoans from every neighborhood and our city’s visitors can gather, learn, grow and be inspired together through creative and educational programming,” said Polk Bros. Foundation CEO Gillian Darlow. “When we first embarked on this journey with Navy Pier, we were galvanized by the vision for Polk Bros Park, and are now delighted to see it come to fruition with the completion of the Park and the launch of new, imaginative programming by arts and culture organizations from across Chicago on the Polk Bros Performance Lawns.”

The Polk Bros Performance Lawns will make their public debut on July 10 with the kickoff of Water Flicks, a free eight-week outdoor film series presented in partnership with the Chicago International Film Festival. Every Monday through August 28, the Pier will show a different water-themed movie each week at its Lake Stage, starting at 7 p.m. Movies include Sharknado
(7/10), Overboard (7/17), Moana (7/24), Splash (7/31), Pirate Radio (8/7), Beach Blanket Bingo (8/14), Finding Nemo (8/21) and Jaws (8/28). Free popcorn will be available to guests on a first-come-first-served basis, courtesy of Navy Pier IMAX® at AMC.

Additional programming on the Polk Bros Performance Lawns includes Chicago Blues Camp for Kids, presented in partnership with Columbia College of Chicago, which will offer local youth a day of blues music training, workshops and performance opportunities on July 11 from 1 p.m. to 5 p.m. On July 12, Wiggleworms, the current children’s live music series presented in collaboration with the Old Town School of Folk Music, will move to the City Stage. The series features two performances every Wednesday and Friday at 10 a.m. and 11 a.m. through August 18. Also beginning July 12, guests will be able to view Navy Pier’s signature Aon Summer Fireworks from the Polk Bros Performance Lawns every Wednesday and Saturday at 9:30 p.m.
and 10:15 p.m., respectively.

While programming on Polk Bros Performance Lawns begins on July 10, Navy Pier’s Birthday on July 15 will mark the official opening weekend for the new space. The Pier will celebrate the grand opening and its 101st birthday with a full day of festivities, starting at 11 a.m. with an opening ceremony featuring traditional Native American drumming and dancing by Seven Springs, Native Veterans, World Champion Fancy Dancer Larry Yazzie and others. At noon, the Pier will acknowledge the recipients of its 101 Rides 101 Nonprofit Partnerships program, followed by an African drum performance by Oyotunji at 1 p.m. and an Asian drum and lion dance performance presented in partnership with the Chinese Fine Arts Society at 2 p.m. In the evening, Navy Pier will host Lakefront Swing, a jazz centennial celebration of Ella Fitzgerald, Dizzy Gillespie and Lena Horne, featuring singers Felicia Fields and E. Faye Butler alongside trumpeter Victor Garcia in tribute to the jazz legends. The festivities will conclude with a special viewing of the Aon Summer Fireworks at 10:15 p.m.

On July 16, Jazz City’s Chicago Latin Jazz Festival will make its last stop in its five-week celebration of the culture and diversity of Latin jazz when it takes the Lake Stage. The Festival, presented in collaboration with the Jazz Institute of Chicago, will feature Chicago Latin Jazz Collaborative’s tribute to Dizzy Gillespie at 3 p.m. and Charlie Sepulveda & The Turn Around (from Puerto Rico) at 4:30 p.m. Tap Fest, in collaboration with Chicago Human Rhythm Project, will follow on July 19, showcasing a range of percussive dance, multiple tap dance artists and organizations starting at 7 p.m. On July 26, 27 and 28 Chicago Shakespeare Theater will kick off its annual Shakespeare in the Parks series with three free performances of the classic play, Romeo and Juliet, each evening at 7 p.m. in Polk Bros Park, north of the Performance Lawns.

Free programming in Polk Bros Park will continue in August with Water Colors, a weekly live jazz music series held every Wednesday at 6:30 p.m. from August 2 through August 30. Navy Pier will team up with the Jazz Institute of Chicago once again to present 90-minute sets by local jazz musicians on the Lake Stage. On August 13, the Pier will join forces with the Puerto
Rican Arts Alliance to host Noche Caribena, a special concert featuring music ensembles from the Latin America and Caribbean diaspora. Performances will begin at 6 p.m. Country fans are in for a treat on August 20 as Navy Pier partners with the Old Town School of Folk Music to present Country Skyline, a country music variety show showcasing local country artists.
The concert will kick off at 6 p.m. at the Lake Stage. On August 25, Navy Pier will revive Planet Chicago, a Pier-wide dancing festival with performances beginning at 5:30 p.m.
Other current offerings in Polk Bros Park will continue throughout the summer, including Sunset Yoga every Tuesday at 7:30 p.m. and Roger Hiorns’ A retrospective view of the pathway, the temporary interactive public art installation presented in partnership with EXPO CHICAGO, which produces giant foam clusters from its large-scale stainless steel tanks.

All programming in Polk Bros Park is free and open to the public as part of Navy Pier’s commitment to raising its profile as a mission‐driven cultural organization, with continued focus on offering dynamic and eclectic experiences through meaningful partnerships and programs. As the Fifth Third Bank Centennial Celebration continues in 2017, the Pier looks forward to introducing more exciting and innovative year‐round programming for guests to experience and enjoy for free. Navy Pier cultural and community programming is supported by the Polk Bros. Foundation. For more information on this and other special offerings at the Pier, please visit www.navypier.com.

About The Polk Bros. Foundation

Polk Bros. Foundation is a private independent foundation guided by the question: “What do Chicagoans affected by poverty need most?” As one of the largest funders of Chicago nonprofits, it engages at the intersection of the city’s pressing issues to address poverty’s complex roots and devastating effects. Because Chicago families were the heart of the Polk Bros stores, the Foundation
was established in 1988 to give back to Chicago families. Polk has since partnered with over 3,000 Chicago nonprofits to build strong communities and strong families, increase access to quality education and the arts, improve health, and to strengthen their organizations and the sectors in which they work. Polk Bros. Foundation grants more than $20 million to over 350 nonprofit partners every year, and manages assets greater than $400 million. Learn more at www.polkbrosfdn.org.

Founded in 1999, James Corner Field Operations is a leading-edge landscape architecture and urban design practice based in New York City. Serving an international clientele, the practice is renowned for strong contemporary design across a variety of project types and scales, from large urban districts and complex planning sites, to small well-crafted, detail design projects. In all of the work, there is a special commitment to the design of a vibrant and dynamic public realm, informed by the ecology of both people
and nature.

James Corner is the founder and director of Field Operations. With over 25 years of experience in the field, he directs all design projects in the office. Together with over 50 exceptionally talented design and planning professionals in the office, the practice sustains the highest levels of artistic creativity combined with professional responsiveness, building projects that are as imaginative and dynamic as they are responsive to client needs, communication, schedule, deadlines, cost, feasibility and ease of implementation.

Located on Lake Michigan, Navy Pier is one of the top-‐‐attended nonprofit cultural destinations in the Midwest, stretching more than six city blocks and welcoming more than nine million guests annually. Originally opened in 1916 as a shipping and recreation facility, this Chicago landmark showcases more than 50 acres of parks, restaurants, attractions, retail shops, sightseeing and dining cruise boats, exposition facilities and more. In 2017, Navy Pier continues to celebrate its centennial with a series of special events and programming, year-‐‐round rides on the Centennial Wheel and ongoing pier-wide redevelopment efforts as part of the Centennial Vision. Navy Pier, as a nonprofit organization, maintains and manages the 50-acre pier that is being redeveloped as a
contemporary, environmentally responsible urban space. More information is available at www.navypier.com.