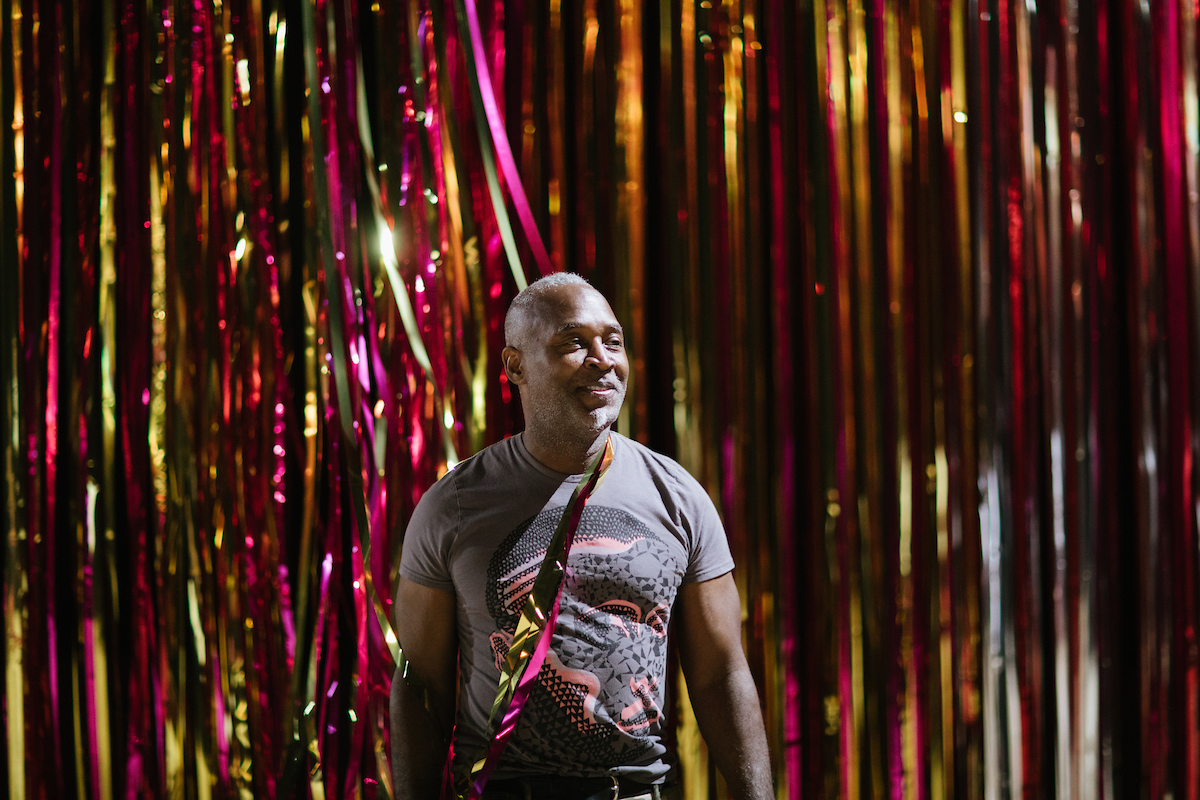 CHICAGO – Navy Pier, Chicago’s year-round lakefront destination, invites guests and the community to come and “let go” through dance and movement at The Let Go – a free, immersive and interactive performance installation in Festival Hall A from Friday, April 3 through Sunday, April 12, which coincides with Chicago Dance Month in April.

Created by internationally-acclaimed and Chicago-based artist Nick Cave, the installation is presented in partnership with EXPO CHICAGO, The International Exposition of Contemporary and Modern Art, and the Park Avenue Armory, who originally commissioned the work and debuted it in New York City in 2018. This dance-based town hall – part art installation, part music venue and part dance club – will allow for social gatherings and be activated by “Chase,” a multi- colored, 40-foot high, 100-foot-long mylar sculpture that glides across the dance floor. People of all ages are invited to explore art through movement, release their creative energy, celebrate independence and engage with the community.

“It’s important for me that my work connects with people, all people. I see my art as a platform that invites everyone to share a collective experience,” said artist Nick Cave. “For me, Navy Pier is the perfect space for The Let Go because of its magnetic pull on so many different populations and the destination’s ability to bring people from all over together.”

“Navy Pier is thrilled to welcome back Nick Cave, one of the most imaginative, innovative and inclusive artists in the world, to present The Let Go,” said Michelle T. Boone, Navy Pier’s Chief Program and Civic Engagement Officer. “As the ‘People’s Pier,’ this installation allows for families, art lovers, dancers, and adults and children of all ages to experience a unique opportunity to immerse themselves in Nick’s latest installation featured in his hometown for the first time.”

This multi-disciplinary experience is supported by generous grants from Choose Chicago, The Joyce Foundation and Jennifer Steans and Jim Kastenholz.

The Let Go will be free and open to the general public during the following dates and times:

While admission to The Let Go is free, there will also be two ticketed special events to support and energize the project. Chicagoans are invited to attend the Freedom Ball on Thursday, April 9 from 7 p.m. to midnight, an evening celebration of art, house music, fashion, creativity and the power of community, featuring a competitive costume runway show with cash prizes totaling $15,000 awarded by a panel of guest celebrity judges. At the Artist Response Night, the second premiere event of The Let Go on Friday, April 10 from 8 p.m. to midnight, artists of different mediums, invited by Nick Cave, are asked to respond to “Chase” and interpret and create a site specific performance, including Chicago-based poet and spoken word performer avery r. young and “The Empress of Soul” entertainer and songwriter Terisa Griffin. Tickets are available online here respectively (Freedom Ball; Artist Response Night) as well as at the door. Bundle ticket pricing options are available on Eventbrite. Guests are encouraged to purchase tickets in advance and additional event details will be announced in the upcoming weeks.

To illuminate The Let Go, EXPO CHICAGO will host a symposium as part of /Dialogues in collaboration with the School of the Art Institute of Chicago on Wednesday, April 8 from 10:30 a.m. to noon in the SAIC Ballroom, featuring Nick Cave in conversation with others to be announced.

“The exposition’s year-round international program for panel discussions, /Dialogues, will return to Chicago this Spring on the occasion of this momentous installation at Navy Pier,” said Stephanie Cristello, EXPO CHICAGO Artistic Director. “The Symposium will provide a platform for critical discussion and context with Cave, one of the leading artists in the United States working in Chicago, through a multi-part conversation that delves into the concept of The Let Go, and the local histories embedded within the work.”

As a mission-driven nonprofit, The Let Go is part of Navy Pier’s free, year-round arts and culture programming, designed to inspire, educate and connect communities across the city and globe. In addition to attending The Let Go, guests are encouraged to check out other Pier-wide experiences in dining, retail, attractions and more. For more information, please visit www.navypier.org.

Nick Cave is an artist and educator working between the visual and performing arts through a wide range of media inclusive of sculpture, installation, video, sound, and performance. His solo exhibitions have toured globally from the United States through France, Africa, Denmark, Asia, South America, and the Caribbean. Cave also works as a professor at The School of the Art Institute of Chicago and received his MFA from Cranbrook Academy of Art and his BFA from the Kansas City Art Institute. Two exhibitions related to The Let Go will be presented at Jack Shainman Gallery: Weather or Not in May 2018 and If a Tree Falls in November 2018. Recent exhibitions and projects include: Nick Cave: Feat. (The Frist Center for Visual Arts, 2018); Nick Cave: Until (Mass MoCA, 2017); Nick Cave (Telfair Museums, 2017); Spotted by Nick Cave (artspace 2016); Nick Cave: Here Hear (Cranbrook Art Museum, 2015); Currents 109: Nick Cave (Saint Louis Art Museum, 2014); Nick Cave: Sojourn (Denver Art Museum, 2013); and HEARD•NY in New York’s Grand Central Terminal (2013).

Part palace, part industrial shed, Park Avenue Armory fills a critical void in the cultural ecology of New York by enabling artists to create, students to explore, and audiences to experience, unconventional work that cannot be mounted in traditional performance halls and museums. With its soaring 55,000-square-foot Wade Thompson Drill Hall and an array of period rooms, the Armory offers a platform for creativity across all art forms. Together, these and other spaces within the historic building utilized for arts programming comprise the Thompson Arts Center.

Since its first production in September 2007, the Armory has organized and commissioned immersive performances, installations, and cross-disciplinary collaborations in its Drill Hall that defy conventional categorization and challenge artists to push the boundaries of their practice. In its historic period rooms, the Armory presents its acclaimed Recital Series, which showcases musical talent from across the globe and the new Artists Studio series, which features innovative artists and artistic pairings. The Armory also supports artists across genres in the creation and development of new work through its annual Artist-in-Residence program, which each year offers several artists space and resources to produce new works and present them as part of the Armory’s programming.

About EXPO CHICAGO
Opening the fall art season each September, EXPO CHICAGO, The International Exposition of Contemporary & Modern Art features leading international galleries alongside one of the highest quality platforms for contemporary art and culture. Hosted within Navy Pier’s Festival Hall, EXPO CHICAGO’s ninth edition will take place September 24 – 27, 2020. EXPO CHICAGO presents a diverse program, including /Dialogues (presented in partnership with the School of the Art Institute of Chicago) and Exchange by Northern Trust, an unrivaled talks program for both public and VIP audiences; IN/SITU, dynamic on-site installations highlighting large-scale sculpture, film, and site-specific work; and major public art initiatives, including IN/SITU Outside, public art installed throughout Chicago Park District locations, and OVERRIDE, a curated selection of international artists throughout the city’s digital billboard network. The EXPO CHICAGO program also features an unprecedented commitment to host curatorial initiatives during the exposition, including the Curatorial Forum in partnership with Independent Curators International (ICI), and the Curatorial Exchange, which partners with foreign agencies and consulates to expand the exposition’s global reach. EXPO CHICAGO is the publisher of THE SEEN, Chicago’s only international journal of contemporary and modern art criticism, online and in print. EXPO CHICAGO is presented by Art Expositions, LLC. Under the leadership of President and Director Tony Karman, EXPO CHICAGO draws upon the city’s rich history as a vibrant international cultural destination, while highlighting the region’s contemporary arts community and inspiring its collector base. For more information on EXPO CHICAGO and EXPO ART WEEK (September 21 – 27, 2020) visit expochicago.com.